What is Competitive Cheer?

Competitive Cheer is when a team of athletes compete against one another using 3 to 4 minute routines containing stunts,tumbles,and dance.

What a Routine Contains

Stunts are a major part of Competitive Cheer. Stunting is when four athletes in a group collectiveley lift another athlete to do tricks in the air.

Positions in a Stunt

There are two bases in every stunt. these athletes are in charge of a majority of the weight of the athlete in the air.

There is one back for every stunt group. This person is in charge of the back of the stunt and helping the bases lift.

There is one front for every stunt group. this person stands in the front of the group and helps all other three people to lift the athlete in the air.

There is one flyer for every stunt group. this is the athlete that goes in the air. although it sounds like the lightest job, it is the most complicated. This person is expected to perform tricks in the air that require extreme precision and skill. 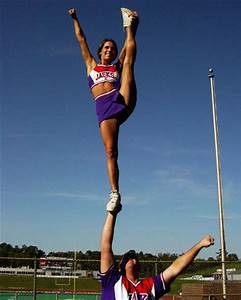 Tumbling is where gymnastics comes into the routine, athletes move across the mat in a synchronized motion performing tumbles including roundoffs, backhandsprings,fulls